I’ve owned both second (this car, an SW20) and third generation MR2s.  The first generation never caught my eye enough to own one.  It’s got the go-kart feel, but lacked severely in terms of power, aesthetics, and comfort.  The 3rd generation MR-S seemed to solve those problems.

The power is still lackluster at 138hp, but at 2195 lbs, it’s still very fun to whip around corners and could pull low to mid 15 second quarter miles.  It lacks any sort of utility (read: storage space) when compared to its earlier brethren and because it’s a convertible it comes with its own set of headaches. 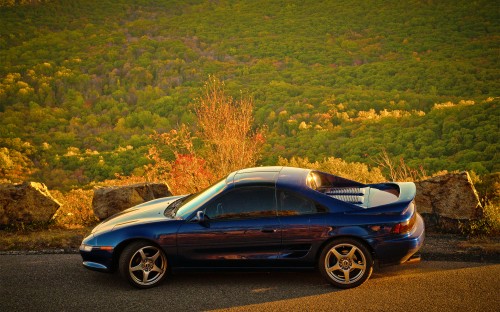 The android ecosystem is better set up for in-car use and runs a bit better than a windows based carputer.  Rounding out the interior, is a set of Boston Acoustics Pro 60 series component speakers and dual Boston Acoustic G110 10″ subwoofers behind each seat powered by a Boston Acoustics 5 channel amplifier.  My plans are to rewrap the stock seats in two tone blue/black leather with a custom embroidery of sorts on the head rest.  If I’m feeling generous, I’ll toss in heated seats, as well. 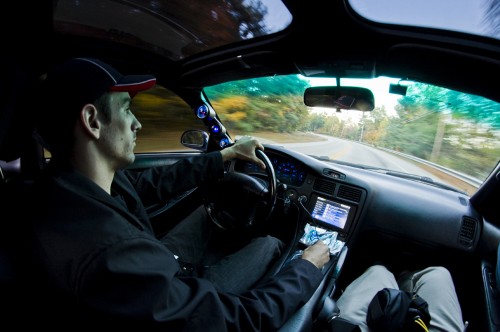 Under the hood, it’s seen a lot of abuse and a lot of love. This is the first engine rebuild, done in 2010.  I yanked the motor out, sandblasted parts, and repainted them.  During this build I made the mistake and went with a GT28RS and a stock head gasket.  The head was completely machined and Ferrera stainless steel valves were dropped in.

Unfortunately, the motor breathed too well, causing the little GT28RS to overboost consistently, eventually blowing the stock head gasket.  The second rebuild was just completed this summer with the GT3071R kit and external wastegate.  I also went with an MLS head gasket and had the head readjusted with new valve seats.  No overboost to speak of yet and I’ve already beat the bag out of it while tuning. 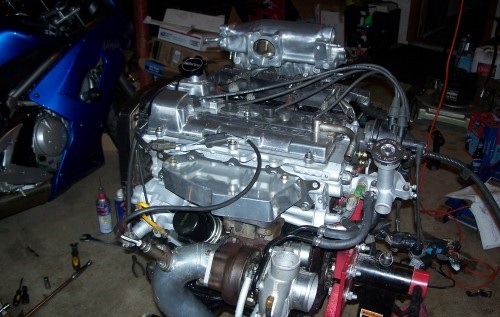 Stock, the motor is rated at 200hp, which isn’t much.  However, that same motor can easily handle 300-350 hp with simple bolt-ons without sacrificing reliability.  On a prior iteration of my build,  the car made 350bhp on a dyno.  That was using a TD06 20G @15 psi and a chipped stock ecu.  I’ve since gone through two other build iterations and currently run a GT3071R turbo kit with an Apexi PowerFC full stand alone ecu.  It’s a bigger turbo with much better air flow and faster spool, thanks to its ball bearing CHRA.  While I’m still hammering out a final tune, my initial impressions are that it’s just as fast at 10-11psi. 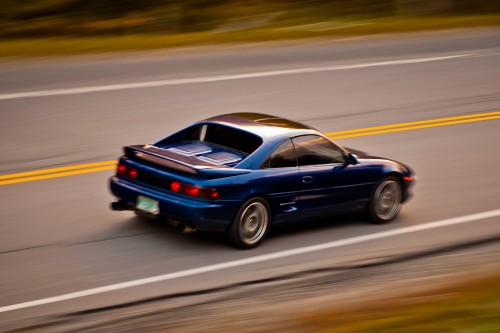 Fastest MR2 in the World

I haven’t done many body modifications to the MR2.  The car has great curves from the factory, and I didn’t want to ruin them.  I did add clear side markers, darkened tails, and a smooth center grill on the rear end trunk area.  The wheels are Enkei racing RP03.  It’s a very elegant, simple 5 spoke wheel weighing around 17 lbs.  They are 17×7 in the front and 17×9 in the rear running Sumitomo HTR z series summer tires.  215/40/17 in the front, 245/40/17 in the rear. It keeps the car very well planted on the street. 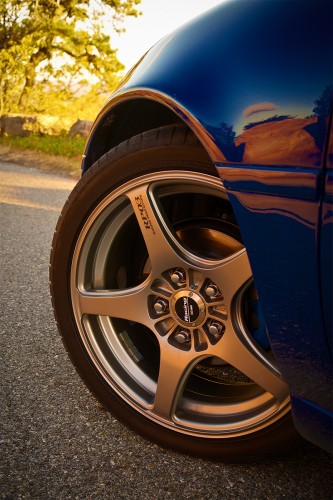 In addition, I’ve converted the stock head lights to H4s.  The suspension consists of Tokico 5 way adjustable struts on Eibach pro kit springs, to lower the car about 1-1.5″.  Rounding out the body modifications is a custom Spectra Blue Mica paint job and shaved badges (minus a single toyota symbol on the trunk).  I tinted the windows to protect the interior from the ravages of sun and heat.

The biggest problem with these cars is the head gasket.  The stock head gasket is only good to 20 psi or so.  My oem HG lasted to 188,000 miles where it blew because of my own stupidity.  I took the car down to a meet on a hot summer day and was beating the bag out of it, while knowing that my thermostat was on its way out and would stick occasionally.

That caused the car to severely overheat and play pop goes the gasket.  The car would still drive, and only drink coolant under excessive load (5th gear, or boost).  I could drive it around the city all day and never have an issue.  When I finally gained the funds to address it, the shop that tore the motor apart said it was the worst HG they’ve ever seen.  It had wrapped over itself in a couple spots.  They had no clue how it would drive around for months without any sort of consequence even if I stayed out of boost and didn’t use 5th gear. 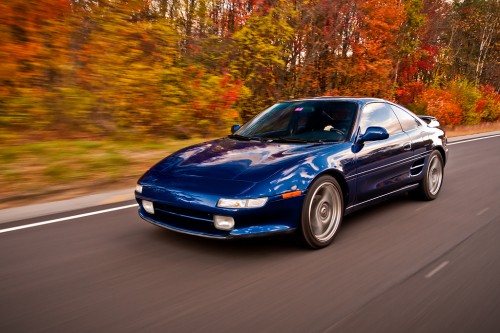 Driving, it’s fantastic, it looks like a mini ferrari, feels like a grounded go kart, and moves like a lightweight STi on steroids. If I were doing it all again, I’d probably stroke the motor for more low end grunt.  The NA sister of this car, has a 2.2l engine.  The crank in that is known to handle >500 hp and can easily be machined to fit within the block of the 2.0.  Later down the road I may also upgrade the intake manifold or add a pair of mild camshafts.  Tuning this car is pretty easy and safe as long as you understand how and use a methodical approach.

More about the Blue MR2