You think that you’re such a rebel because you smudged a bit of ink on your car insurance claim. Insurance fraud of any caliber is risky business, but you’ve got nothing on the biggest car insurance frauds ever caught. Of course, it makes one wonder about the frauds that didn’t get caught.

In April, a whole slew of people went to jail in Philadelphia for committing car insurance fraud. The story sounds like the beginning of a really bad joke: a cop, a lawyer, seven damage appraisers, and the owner of an auto body shop walk into a bar…

Well, they may or may not have met in a bar, but they certainly will have plenty of time to get to know each other in prison. The whole group was charged with an ongoing auto insurance scam that lasted for four years. According to prosecutors in the case, the group earned millions of dollars by ripping off insurance companies. 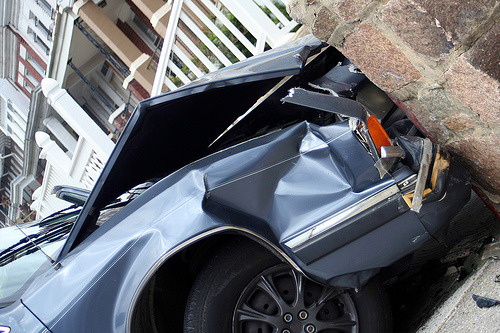 How does one make millions in the car insurance game? These guys found plenty of ways. The two most prevalent methods involved reporting more damage than had occurred during an accident. They would then file the claim and collect more money than they needed to fix the car. When in doubt, though, you can just beat on the car and cause extra damage. Then you file a trumped-up claim and reap the rewards.

If you’re a personal injury lawyer, then you can live up to your profession’s stereotyped reputation by sending people over to the shady auto repair shop, where they will charge the insurance company higher rates and give you a 20% kick back.

This gang of miscreants was pretty good at the scheme, too. It took Philadelphia investigators over a year to gather enough information to charge them with insurance fraud.

When the Economy Goes Up in Flames…

Not all car insurance fraud happens as the result of massive conspiracy involving nearly a dozen men who should know better. On some occasions, it’s just a lot of desperate people that can’t find a good solution to their financial problems.

Let’s say you have a car payment that you cannot afford anymore. Maybe you’ve lost your job, or your mortgage skyrocketed, or you got sick and had to pay for expensive medical treatment. Regardless of your reason, looking at your car, you’re wondering how to make the next payment. And then it hits you: maybe I don’t make the payment. Maybe this whole problem can disappear in a puff of smoke. Come to think of it, maybe I can actually make some money from this heap! 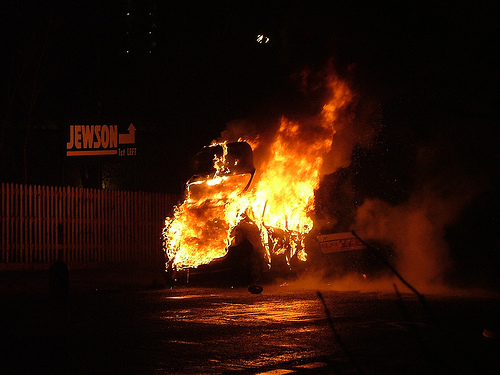 Similar thought processes have been occurring through the city of Las Vegas since the economic downturn caused massive financial woe in the city that knows no limit to excess. In fact, during the first third of 2011, the Las Vegas Police Department found 70 charred remains left by people that just couldn’t afford to make their car payments anymore.

Of course, you don’t have to take such a violent approach. Cars can be driven out into the desert and reported stolen, too. Then you just sit back and wait for a check to roll in from your insurance company.

The problem isn’t just in Las Vegas. In fact, reports sprung up all over the country. One of the most amusing has landed a high school chemistry teacher in hot water: facing a growing mountain of debt, the teacher made a deal with two of her students: torch my car and I’ll give you passing grades.

Here’s a lesson that teacher should have learned earlier in life: don’t trust two of your dumbest students to follow through with plans perfectly. After confronted, it didn’t take the two punks very long to squeal.

The real kicker is that the teacher never got her insurance money, plus she still has to make her monthly car payments, even though she doesn’t have a working vehicle.

These stories might sound absurd, but they’ve become more popular since the recession started in 2007. The Insurance Research Council states that fraudulent claims account for up to 6.8 billion dollars of payments in 2007. That’s the most recent year with complete data. It will be interesting to see what future research uncovers.

Today’s increase in auto insurance fraud should make you stop in your tracks before taking a match to your car. The amount of fraud happening on an individual basis today, however, pales in comparison to a suit brought against 51 people in 1990.

According to the LA Times, 51 people were rounded up in October 1990 for auto insurance fraud. Over half of those people were thought to belong to the same gang of “professional” frauds. They were accused of being members of the Crenshaw Café Ring, which had been ripping off insurance companies for over a decade. One of the members was a physician in Century City. 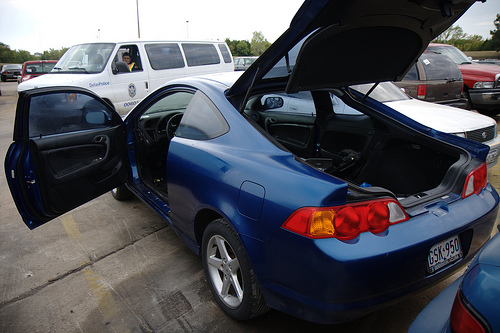 It’s hard to imagine that he got to hold on to his professional insurance after this case. The group had cost policyholders in Southern California more than $45 million. That’s a lot of scratch for a gang with such a terrible, uninspired name.

No matter how desperate you might feel, resist the urge to commit auto insurance fraud. The people working for insurance companies have seen it all. You’re not going to come up with some spectacular plan that will confound them and allow you to walk away without any legal and financial troubles.

Any brilliant plan that you come up with has been devised by someone else. Chances are that the insurance companies have already shut them down, just like they will you. Have you ever heard of someone getting away with insurance fraud? If so, what strategy did they use? We’ll keep all identities hush-hush, so let the stories flow!