Keith is a backyard motorcycle builder in New Hampshire who builds choppers and cafe racers out of old Japanese bikes. I was lucky enough to get to spend some time in his garage, get some pictures of his latest build, and talked him into answering some questions for an interview. This hardtail xs650 is an exercise in extreme minimalism, and gets ridden all through the summer, which qualifies it for our featured vehicles.

On to the interview questions!

Your tastes seem to lean toward older motorbikes, what new bikes pique your interest?

None really. The E.P.A and this “soft” generation of riders are killing it! With fuel injection, rubber mounted motors and push button start, they don’t excite me. I guess if I owned anything newer I could be down with a Ural or a Triumph. That’s just based on looks alone I haven’t really looked into new models from either brand too deeply. 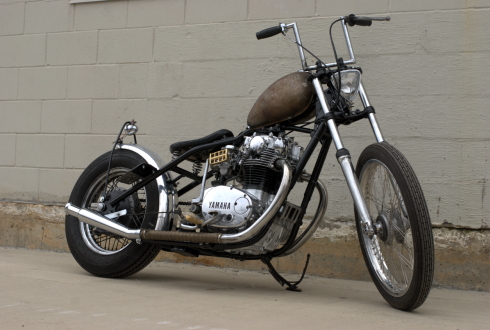 Price! Haha not only that, I love old inline twins. Most of my favorites are British bikes, but those are getting rather pricey these days. Xs’s are fun bikes to build since they have all the right style for a chopper. Also a lot of aftermarket parts and accessories for these rigs are coming out of the wood work. 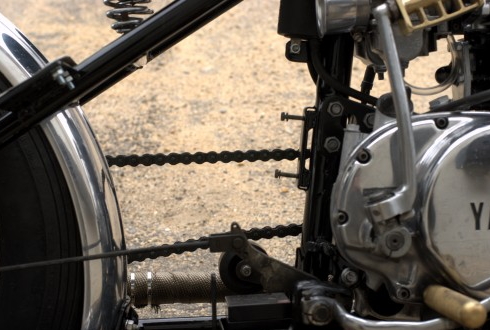 Who are your motorcycling heroes?

Jason Jessee and Max Schaaf are two of my favorite builders. Both former professional skateboarders. They bring nothing but that clean Frisco style to the table. Evel Knievel may not have done a back flip like today’s riders on modern bikes do but he jumped 13 greyhounds on an xr750, which probably outweighs a modern bike 3 times. Steve McQueen is another one. He was a famous movie star back in the day, had all the money in the world and he chose to live in an airplane hanger with all of his bikes, cars and junk haha. 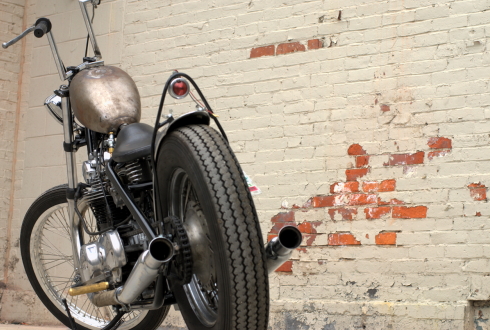 What were your goals with this bike’s build?

I just wanted something clean with class to really show people what you can do with this “jap crap”. 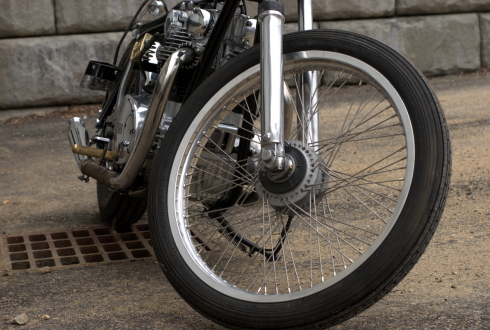 Deciding not to run a front brake is an extreme choice. What drove you to remove it and shave the front forks?

I hate clutter. People back in the day did it all the time so I can’t take credit for this one. It just looks a lot cleaner. I haven’t run a front brake on my bikes in a long time. If you don’t tailgate people you should never need one. A master cylinder and brake lever take up too much room on handle bars and a big old rotor and caliper take focus off of the beauty of a spoked wheel. I never sacrifice looks and style for safety, comfort or function. The bike goes, the bike stops, and even if I feel like a bag of smashed assholes after riding it for a few hours, its perfect. 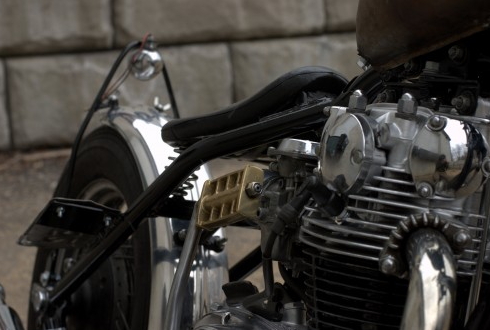 What were the biggest challenges with this bike build?

That god damn 21″ wheel! It’s a stock xs650 inner hub with and after market outer hub and spoke kit. It’s 64 spokes of hell to lace. I have laced Harley wheels before no big deal they’re only 40 spoke with two different styles of spokes and a simple cross two pattern. This beast has four different size spokes which I didn’t  know at first and a cross four pattern.

My buddy Mike Fallon and I were scratching our heads over that for a while haha it was totally worth it. You don’t see this type of 21 on these bikes often. Normally if you want a 21 you swap over to a sportster front end or run a dirt bike wheel. 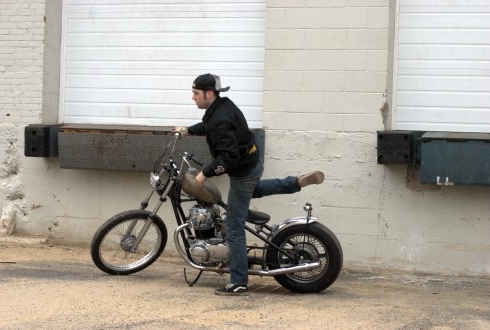 What are you the most happy with on this build?

Every thing just kind of fell together real nice. It’s my dream bike for such a low budget build. Sure, I could spend $12-$15,000 on a bike I really want and have all my dreams come true. But I made do with what I had and overall I’m pumped on how it turned out.

This certainly isn’t your first motorbike project. What have you owned previously?

Well the first bike I owned, I was 9 or 10, it was bad ass mini bike! 5 horse Briggs and Stratton, looped tail frame, solo sprung seat, with mini apes, and trailer style fenders. This Xs reminds me a lot of my first mini bike haha I guess it all comes full circle.

More about the XS650