Motorcycles are no-frills, highly engaging vehicles that put complete responsibility into the rider’s hands. Everything input is direct, and there are no safety devices designed to protect the rider from their own bad decisions. They exist to transport up to two people from one place to another with extreme efficiency.

After spending last season figuring out how to use a motorcycle as a daily driver, I picked up a little 360cc Honda (that’s 0.36liter) for $550. Initially, I was looking for something my girlfriend could learn to ride on, but quickly found that I liked riding it more than my xs650 twin or cb750 four cylinder motorbikes. Small Honda twins are known for being rugged little bikes, and were a pretty big deal when they first came out in the 70’s. 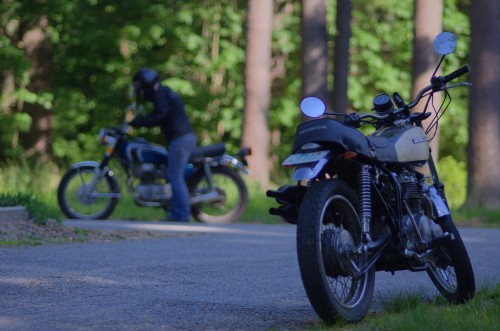 After spending last season figuring out how to use a motorcycle as a daily driver, I picked up a little 360cc Honda (that’s 0.36liter) for $550. Initially, I was looking for something my girlfriend could learn to ride on, but quickly found that I liked riding it more than my xs650 twin or cb750 four cylinder motorbikes. Small Honda twins are known for being rugged little bikes, and were a pretty big deal when they first came out in the 70’s.

Since I bought it this spring, it’s been my daily driver, through wind and rain and snow. Aside from having to pick up a few parts for another project that’s in full swing (more details on that later) which required driving a car, I’ve had this puttering around reliably and saving a ton of cash to boot! Without getting into the details of relying on a motorcycle as a daily driver (we’ll cover that later as well), I’m going to elaborate on what makes this bike so great (and not-so-great).

Some motorcycles come with stereos, reverse, automatic transmissions, electric starters, and (recently) airbags. My CL360 doesn’t even have a tachometer. It doesn’t do anything without input from me. I even have to kick the engine over manually to start it. 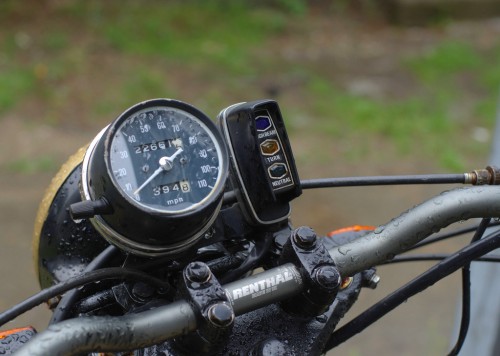 All this minimalism has a few effects:

Even with the ratty paint job and clacking valvetrain, people are always excited to see this bike pull up. From Harley riders to Norton owners, everybody has their own story about the little Honda that could. It’s always fun to meet other people who are interested in whatever I use as a daily, and it was a big factor in deciding to make this my 3-season daily.

Many bikers note that the exhaust is pretty interesting, and that may have something to do with the exhaust cover being the only shiny part of the bike. High pipes are commonly referred to as ‘scrambler’ configurations, and were a solution to insufficient ground clearance for off-road riding. On my first ride home on it, I was worried that I’d burn my leg on a scorching exhaust … but realized the heat shield barely gets warm at all. It isn’t even an inconvenience.

If you aren’t a motorcyclist but think this looks similar, you’re probably thinking of a very similar bike built for the most recent Girl With the Dragon Tattoo movie, in which Lisbeth Salander rode a cb350 with scrambler pipes. That bike was a strong influence for me to get this cl360. 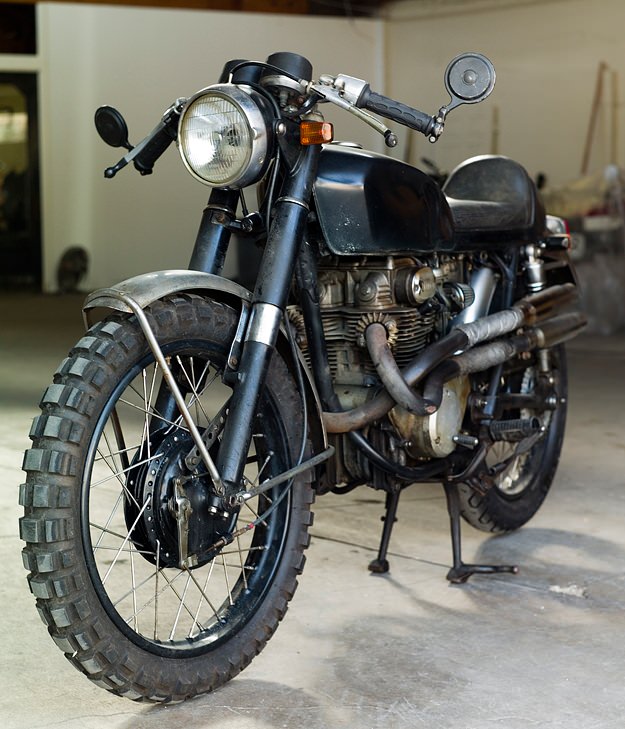 CB350 from Girl With the Dragon Tattoo

I’ve always loved spoked wheels instead of modern mag-style wheels. Mag wheels are lighter (in most cases), stiffer (they handle better), and don’t require regular adjustment, but I have a soft spot for the classy look of well-used spoked wheels.

Working on motorcycles is an entirely different experience than cars or trucks. You don’t need to climb INTO the vehicle or take parts OUT in order to service it, you can simply reach out and touch whatever part you need to access. Those parts are far fewer, as well. There is no differential, no steering linkage, no computers …

When it does need parts, they’re extremely inexpensive. I purchased a refinished gas tank for $25, and that’s considered a typical price. Insurance is also extremely inexpensive ($80/year compared to around $1000/year for a more modern car), it’s great on fuel, and its registration was $16.

This is the most fun motorcycle to ride that I’ve ever been on. That’s including liter bikes, a 600cc gsxr I previously owned, an sv650, among many many others. It’s nimble, flickable, and fun. It easily out-accelerates production cars without having to glance over my shoulder, and will keep up with anything else that’s riding near-legally. 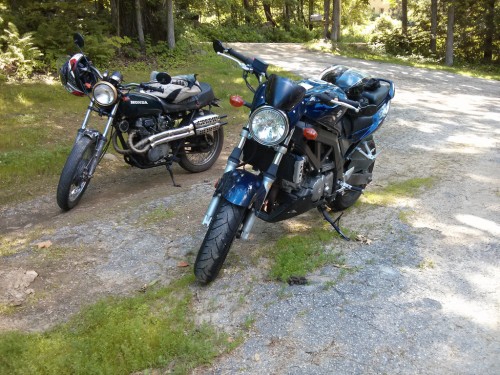 Most people (including myself when I was starting out) try to start out with too much bike. Coming from car-land, an underpowered motorcycle is like driving a very very quick street car. The power on this little Honda only starts to peter out when keeping up with traffic on a fast highway (around 80-90mph). Wind and helmet noise become noticeable without a any fairings as well, so I tend to stick to back roads. They’re significantly more fun, and let this nimble little bike stretch its legs much more.

While I love this bike, there are downsides that are very difficult to overcome. The 350cc versions were better made, more tuneable, and more straightforward to maintain. They also have a very competitive vintage racing class that the 360cc versions are ineligible for. The 360cc bikes are correspondingly inexpensive, compared to the 350cc siblings.

You’ll poke your eye out!

There is an ever-present danger when you’re on a motorcycle. Cars don’t see you, crashes are invariably more gruesome on a bike than they would be in a car, and instead of 4 contact points with the road I only have two. That’s why I ride with all my gear every time I ride, and recommend the same to everyone else. It’s only inconvenient here in New Hampshire because of the time it takes to put the jacket, helmet, gloves, and boots on and the additional planning required to pack rain gear. As long as you aren’t sitting in traffic, the breeze will cool you off. If you are sitting in traffic, you need to discover better alternative back-roads routes.

In New Hampshire, getting an M1 (motorcycle) license isn’t easy. It requires passing a fairly challenging riding test as well as a written test. It’s challenging enough that I failed the first riding test, and had to re-take it. With a scooter, you aren’t required to prove that you’re competent and anyone can essentially hop on one without a helmet and crash into the nearest parked car (that happens a lot more often than it should). Luckily the Motorcycle Safety Foundation offers a safety course that includes the test at the end of it, which I highly recommend to anyone interested in starting out.

Winter is also a problem. Snow and ice are extremely difficult problems to overcome, to the point where I consider a second vehicle a necessity once snow starts to stay overnight. 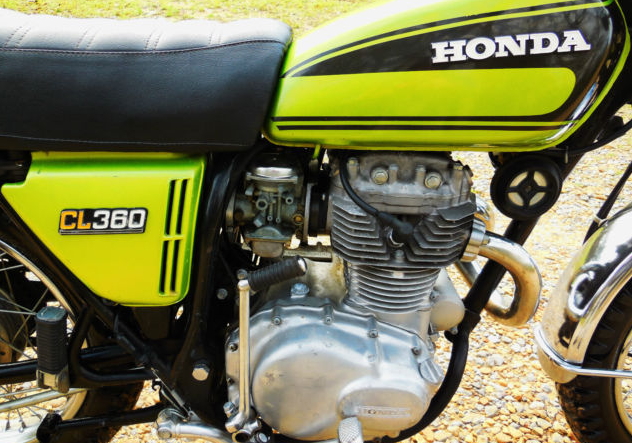 Overall, it’s been one of my favorite vehicles I’ve ever relied on. I actually look forward to going to work in the morning, and sometimes leave early just to take the long way there. Riding a bike every day isn’t for everyone, but it’s the only way to go for a select few of us.

In future articles, we’ll discuss the ins and outs of using a motorcycle as a daily driver during safe months. If you’re ever considered using your bike as a daily, or are considering picking one up for that, keep an eye out for them, and other motorcycle features.