The Repair. My New Car Was Dead

Capitol Tires The Repair. My New Car Was Dead

As I sat in the parking lot of the derelict wood stove supply store, I came to terms with the fact that an electrical fire wasn’t something I could solve while I was out there. I called AAA to get my money’s worth out of them, and had them tow the sad-looking s12 back to my house.

I had to try to figure out exactly what had happened, so I brought out my trusty test light and got busy testing the melted wires. I made a small chart of my own to log which wires were live at which ignition states, and which wires were grounds (and could therefore be ignored for the purposes of testing). That took a few days of after-work testing, and I lost count of how many times I walked from the engine bay to the driver’s seat to change the ignition key’s position then back to log the results.

I had another major issue holding me back:

This rat’s nest of wiring would be an intimidating sight for anyone, but try to imagine looking at a problem like this through my eyes for a moment. I tried swapping my 1986 Nissan (ca20e-equipped) body wiring harness into this 1986 Nissan (ca18et-equipped) car, but found that they aren’t interchangeable. I had hoped that the body wiring harnesses would be interchangeable between cars with the same bodies, and that only the engine  wiring harnesses would differ, but I was dead wrong. I would have to bite the bullet and start rewiring, slowly and methodically. I spent countless nights taking pictures of wires, loading them into my laptop, and using a photo editor to identify what color each wire was so that I could cross-reference that with the wiring diagram from my factory service manual. 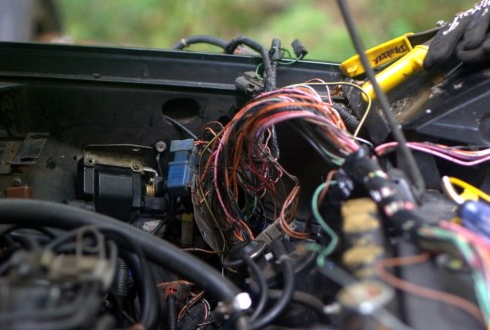 I cut looming and traced wires individually from end-to-end before I finally found the problem. The EFI Control relay had shorted internally and burned out the wire that controls power to the ECU. The Factory Service Manual had mislabeled the ends of that wire, which constantly threw me off the trail of the problem. After several days, I labeled where each wire should have connected to the melted relay, and could take another small step forward.

After all this diagnosis, I decided that I could live without a relay for a 10amp circuit, and wired in my switch panel directly. The startup process for the s12 is slightly more involved now (I need to flip switches before I can start it), but the bottom line is that the car can move on its own power again. While I was prototyping the solution, things looked pretty scary, with exposed wiring dangling throughout the cabin. I assure you, nothing that’s going on in this picture is actually safe. 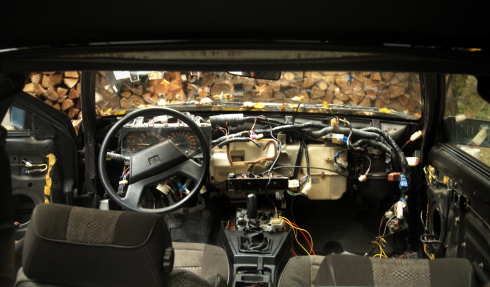 It took another week of putting up and down the driveway to find the original source of the short. One of the ‘fixes’ from a previous owner was to cut the wires to the o2 sensor. The signal wire had shorted out on the ground, and ended up drawing too much current through the relay, which started the failure. Eventually the relay became damaged enough that it shorted itself out, and when it finally went up in flames it took the surrounding wires with it. I sealed off those stray wires and haven’t looked back at them.

Even when compared to rebuilding transmissions, engines, differentials, steering racks, and suspension systems, this was by far the biggest challenge I’ve faced while maintaining my own vehicle. Similarly, few experiences can compare to the happiness I felt when that engine fired up again for the first time. The next challenge is going to be legalizing the s12 and putting it back on the road.

More about The Repair Cars