Sometimes you find inspiring cars in the strangest of places. While shooting a local roller derby team this weekend, I noticed this intensely clean ’84 Mk1 Rabbit parked with the derby girls’ cars. The owner turned out to be a friendly guy named Chad who had come along to skate with the team and help out at their upcoming bout.

We ended up talking about it at the end of practice, and I asked if I could snap a few pictures before we all parted ways for the day. He happily agreed. 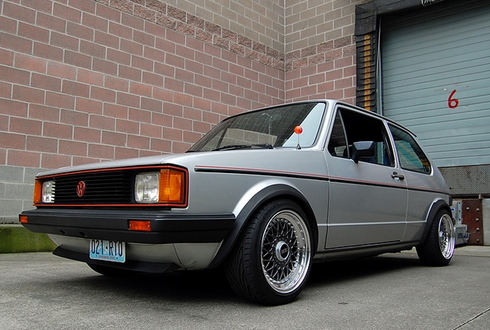 In historical terms, the Mk1 Rabbit was a trend-setter. Starting in 1975 and ending in 1984 when it was replaced with the Mk2 Golf, the Rabbit had a healthy production run in the US. It also became a cult classic almost instantly for being economical, fun to drive, and utilitarian. There were several different flavors of Rabbit, all with their own interesting stories behind them, but the GTI hothatch was the most exciting. It was also the first of the hot hatches, and sparked a huge movement in and of itself.

Chad’s mk1 is pretty clean and simple. The suspension was firmed up with Prothane polyurethane bushings all around the car, including the motor mounts. An extremely stiff (350lb/in!) Rokkor matched coilover setup lowered the car without breaking the bank, suspension geometry, or spring-to-dampener ratios. It looks great at this height while handling like a shepherd’s dog.

Under the hood, the plucky little 8-valve 4cylinder engine is a simple, reliable OEM rebuild. He installed an Autotech tri-y header, Magnaflow cat, 2 1/4 Techtonics Tuning cat back, topped off with a stainless Magnaflow muffler to create a raunchy soundtrack to every drive.

The cockpit of the car is clean and original, with minor classy modifications. The steering wheel was procured from a VW Scirocco, and a few gauges sit in the center console. 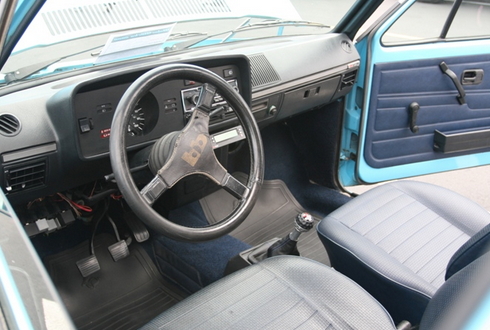 Owning the Rabbit is pretty easy. I’ve replaced the braking system, including lines from the firewall back. I replaced the ball joints 2 years ago. My rear wheel bearings have caused a few issues, but are inexpensive to replace on the Rabbit (just make sure they’re properly packed and you won’t have any problem). Other than that, I’ve just performed oil changes and standard tune ups. Repair parts are plentiful and cheap online and I do all the work myself!

Always start with a car that hasn’t been modified, so you know exactly what you’re getting into.

It’s hard to argue with the reasoning behind that advice, or with the results shown here.
Author:

More about the Rabbit GTI