Engine. The turbocharged 6 cylinder has made its way from the 280zx into the engine bay of my 240z, and is awaiting some wires and fuel lines to be hooked up. Since I’m converting the fuel system from carburetted to fuel injected, I need to install a stronger fuel pump to keep the fuel properly pressurized. I’ve taken the fuel pump off the 280zx that the l28et engine came out of to install in my fuel line running from the gas tank to the engine.

I have two sets new, larger fuel injectors headed this way. They’re from a Mitsubishi Eclipse, which is a 4cylinder, so I had to order two sets and will have two left over. They’re rated at 450cc/min @ 43psi, which means that as long as they’re in working order, they can fill a 450cc container in one minute if the fuel pressure leading to them is 43psi. A fuel pressure regulator offers primitive tuning for that part of the system, since I can adjust the pressure and therefore the amount of fuel they spit into the engine. 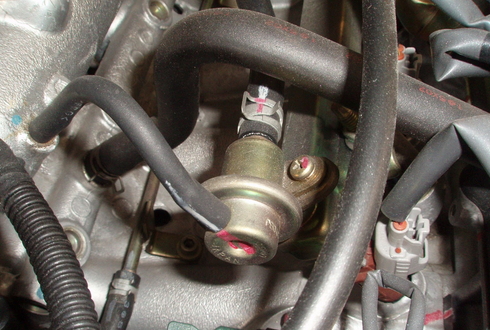 I also received a Turbonetics. 68ar t3/t4 hybrid turbocharger. I won’t go into all the nitty gritt details, but that basically means it can compress air more efficiently than the stock turbo, and squeezes more air into the engine (which requires more fuel to be supplied so it doesn’t run rich or lean). Since it has a t3 ‘hot side’ (turbine that mates to the exhaust) and a t4 ‘cold side’ (turbine powered by the ‘hot side’), it spools up quickly and doesn’t waste any time generating power.

Unfortunately, the hot side doesn’t mate up to my stock downpipe flange (the exhaust piece that connects the turbocharger to the pipes that lead out the back of the car) so I may have to have a new one made or modify the flange that the stock turbocharger used. The ‘cold side’ is also large enough that it actually bumps against the exhaust manifold, which means I’ll need to make a spacer to put it a little farther out. Otherwise, it’s in great working order with no shaft play. 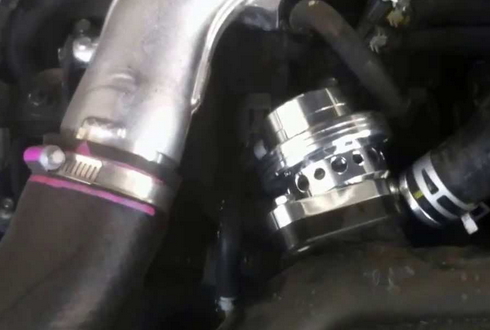 Since this turbocharger did not come with a built-in wastegate, I ordered a 60mm wastegate to control how much power is assigned to spinning the turbine. A wastegate is essentially an air valve that is activated when enough pressure is generated to compress a spring inside it. This particular spring allows the wastegate to open at 4 pounds of boost, which is low even by stock standards (the l28et allows 7 pounds of boost from the factory, still considered conservative).

Also, I now have an intake manifold with a slightly larger throttle body (60mm). On l-series engines, the intake manifold is often the biggest limiting factor for performance but having a larger inlet to the plenum is a good idea. This particular manifold is beautifully simple, with no EGR controls or excess vacuum plugs attached to it, and it leaves me with a spare to mess up when I machine it for the new fuel injectors. 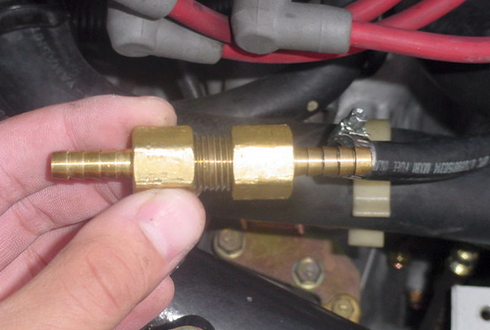 Since the s30 is not equipped with power steering, I needed to find a way to block off the power steering pump mounting space. It’s entirely exposed to the engine and would spew my oil all over the fender well if I didn’t work something out. After purchasing a pile of tools (most of which didn’t even get used), I made a small steel plate and fitted it with a rubber gasket. Rubber isn’t the best material for sealing something like this, so I may end up making a new gasket from RTV sealant and some non-corrugated cardboard (the stuff cereal boxes are made of). We’ll see how this holds up first, though.

After looking around for quite a bit, I finally found a 5speed transmission. It came out of a Datsun truck, which means that it’s a very short transmission, designed for hauling rather than speeding and cruising. The big difference between the 4speed transmissions I have and the 5speed I purchased is that all manual 4speeds have no overdrive (cog that is less than a 1:1 ratio). The 5speed will have overdrive, but it will most likely be a short overdrive. 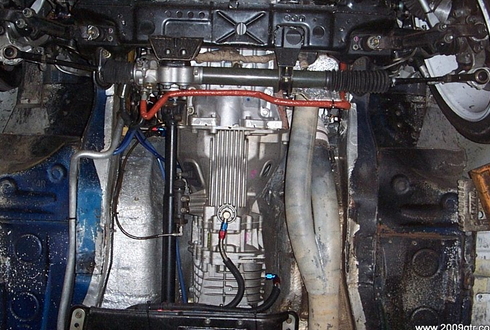 This is all theoretical, and we’ll see how the transmission actually fits in a car it’s not designed for. I’ll put some time into mounting it tonight, but that will definitely depend on the time I have available to me since I’m on call at work this week.

The three 4speed transmissions are going up for sale, and will be available on a first-come, first-serve basis. If you’re interested in one or all three, leave a comment!

A front air dam and front bumper, along with some paint in the interior and engine bay have cleaned up the look of the car a fair amount. The seat rail I ordered for a 260z apparently has a different bolt pattern than for a 240z, so I’m going to have to fabricate something new to get my seats mounted up.

To activate the electronic fuel pump and electric fan, I made a switch panel out of some sheet metal I had lying around. It’s just a simple square design with holes in 4 corners to screw it in where the stock radio was. I haven’t decided what switch to put in the right-most hole, but for now I think I’ll just add a dummy switch so it doesn’t look like there’s just a hole there.

Finally, it’s starting to come together and look like a car. I shouldn’t need to order too many more parts, but I expect to replace the bushings and brake pads (possibly rotors) before leaving for the cross-country trip.

By the end of the weekend, I plan to have the transmission and seats installed, and hope to be able to fire the engine up. Once the 280zx is out of my garage, I can lift the car, overhaul the brakes, and see what the suspension looks like. Until next time!