Toyota Camry, a descendant of a purely Japanese Toyota Celica Camry, which had been extremely popular in Japan between 1979 and 1982, has quickly invaded the US market and has become the America’s best selling car. Moreover, this model has won the Sales Crown in the United States 12 times in a row, which definitely means a lot.

No wonder that this vehicle has got this award that many times. The owners describe it as a practical and spacious vehicle, which features strong value for money with the solid engineering. And this is a combination of features that the most competitors cannot match.

Why Toyota’s Model was Called Camry?

The word ‘Crown’ itself has always meant a lot to Kiichiro Toyoda, the founder of Toyota Motors Corporation. The thing is that there is a companywide tradition of naming the primary vehicle models with the crown names. The first vehicle that got this name was Toyota Crown, released in 1955. The followers were Toyota Corona which was introduced back in 1957 and Corolla, which was shown to the world in 1966. Corolla in Latin means ‘the small crown’. While the name ‘Camry’ is a phonetic transcription of the Japanese word ‘kanmuri’, which also means ‘crown’. Cutting a long story short, this vehicle was doomed to be successful from the very beginning. 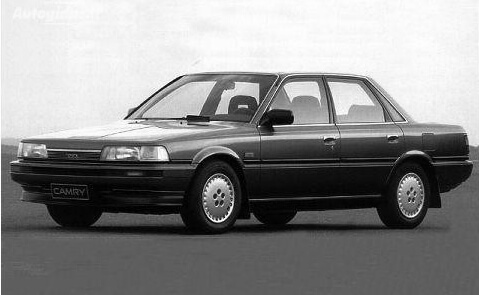 The story of Camry begins with Toyota Celica Camry, a four-door sedan with a long wheelbase which has barely resembled the Toyota Celica itself. After this model was shown to the world in Japan back in 1980, it was decided to launch the series of Camrys. So the first Camry was released in 1982 which was a front wheel drive model, similar to its predecessor. It featured a transversely mounted 1.8 L engine and a bit altered design.

The next generation of Camrys was represented by V20 series and was in production since 1986 up to 1990. It was a four-door sedan, as well as the previous generation Camry. This model was the strongest competitor to Mercedes Benz models in the US, and it was Camry which was likened by the customers, since it was less expensive and featured all the functions, provided by Mercedes. This vehicle was the first Japanese model, equipped with the driver’s side air bag. Also it was known as the quietest car, since the rear suspension was mounted directly to the subframe, which caused extra noise isolation.

Why is it that popular?

Toyota Camry is known as an extremely reliable vehicle that has always featured high-grade workmanship. So no wonder that out of all the Camrys that were sold for the previous 10 years, 90% of them are still on the road and you share the highways with those guys even today. And even at this moment more and more US drivers choose Camry as the mid-size sedan, choosing this model as the one to meet their needs and expectations. Usually this model is compared to a larger, full size Avalon and a compact Toyota Corolla.

So Camry is the mid version, therefore is the most popular than these two. The rate at which Camry is sold in the States is really worth being mentioned. Just imagine, every hour 50 car buyers drive off their local Toyota dealership on a brand new Camry. And to meet this high demand for this model, a new Camry comes off a production line every minute. By the way, the price of a brand new Camry in any US Toyota dealership starts at $22.970, and an average fuel consumption is 25/35 mpg. Just imagine how popular it is! No wonder that they have sold more than 10 million Camrys in the country throughout the history of this model.

Let’s look closer into the technical characteristics of this vehicle and we’ll try to figure out, what makes this specific model that popular. Throughout four generations, Toyota Camry features either a 4-cylinder engine or the V6 one. The base engine in the model is a 2.5 L engine which features a combined 25 – 28 mpg. The more powerful version, a 3.5 L V6, which is available in almost all trim levels of this model, has a combined 22 – 25 mpg. The 3.5 L version also features a dual exhaust, while the 2.4 L version has a single exhaust outlet. All the Camrys, starting from the very first model that had seen the world over 30 years ago, are front wheel drive. 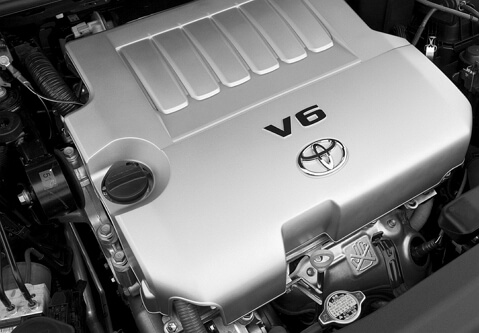 Out of the whole model range of Camrys, the most popular and the most demanded were XV40 models, which have been introduced back in 2006. This vehicle also offers a choice of a 4-cylinder or a 6 cylinder engine, which feature 158 and 268 horsepower accordingly. The standard versions already include the power locks, traction control and stability control. The models were upgraded in 2010, and the 4-cylinder engine models became available with either five speed manual or automatic transmission, while the 3.5 L V6 models featured either a 6-speed manual or automatic transmission. This series is also famous for the fact, that XV40 Camry was the first model of this model range available as a gas/electric hybrid model. This vehicle has begun a new era of the environmentally friendly Toyota Camry models, which not only have their input into the better ecology of tomorrow, but also save money to their owners today, being far more economical, than the gas models.

The new Camry features a restyled exterior which looks more aggressive with the lower bumper surrounding and the built-in HIDs. This model is also available as a 178-horsepower 2.5 L 4-cylinder version or a 268 3.5 L V6 on regular gas. Also there is a hybrid version available.

The customers who are lucky to own one of the latest Camrys note that the steering is easier on this one, compared to the predecessor. Some say that Michelin tires drive quieter and Bridgestones are a bit louder. But in any case the engine, road and wind noises were reduced in the newest model.

Some note that the breaks are not that touchy in the new Camry. And almost everyone has noted that the interior features better materials and the dash has more features and controls, compared to the older version. But every owner feels that this is a great purchase and some even note that this is the best car they have ever owned in their lives. Isn’t such feedback of the owners the highest award for a vehicle?

More about the Toyota Camry