The uses of social media are well documented, both for brands and consumers. Social media is an excellent tool for keeping connected with people and not only allows consumers to talk to their friends, but helps brands reach out to consumers and offer them discounts, vouchers and deals on their next purchase.

Brands from almost every sector have at one point tried to use social media to sell products to clients, but one sector that has been remarkably quiet on the social media front is the automotive industry. After all, people like to test drive a car before they buy it and social media does not allow them to do this.

Nevertheless, the car industry is beginning to catch on to the social media craze and is beginning to use online technology to sell cars to drivers. The question is, which is the better option for consumers? Will they find the best deals on social media sites or by going into dealerships?

Carmaker Ford was one of the first manufacturers to begin using social media to sell vehicles. The brand gave 100 of its Fiesta models to heavy Internet users to trial for six months on the condition that they would then review the cars and post comments about them on sites such as Facebook, Twitter and Flickr.

The aim of the campaign was to target young 20-somethings and change their existing perceptions of the brand. Although the cars were not actually put up for sale on social media sites during the trials, the move did show a concerted effort from the brand to engage the social media audience and interact with them on their level.

Groupon, the group-shopping site that offers discounts to consumers based on the number of people who take up an offer, has just launched its first ever automobile promotion. The site is offering $500 off the purchase or lease price on any vehicle when consumers pay $199 towards the coupon.

Unfortunately, the deal is only available for a single car dealer in the Detroit area, meaning that the vast number of drivers looking to buy a car are unlikely interested in the offer. Besides, there is really nothing stopping the car dealer from increasing its prices during the time of the deal to make sure that it does not lose any money.

Still, the experiment is an important undertaking to show the future potential of social media’s role in car sales. Should the deal prove successful, Groupon may wish to arrange discounts with other manufacturers on a wider scale, meaning people could save significantly on any future car purchase.

Toyota has used social media in a slightly different way to sell cars. The brand recently launched its ‘Toyota Friends’ campaign, which combines the communicative elements of social media with driving.

The campaign saw social media technology set up inside the brand’s actual vehicles. From this, drivers would receive updates in a style similar to tweets about the status of their car and its functionality, such as whether they needed to buy more petrol. Drivers could also be connected instantly to Toyota help-desks and services in the event of a problem. 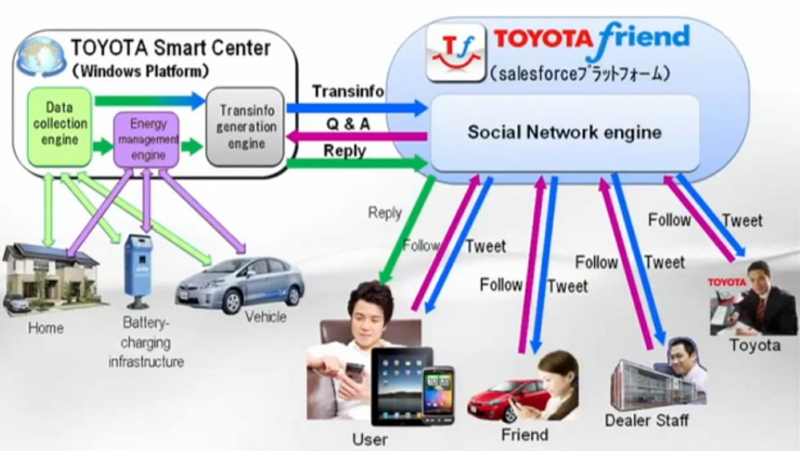 Although this technique does not actually offer cars for sale on social media outlets, its does utilize social media for what it does best — help people feel connected to someone else, in this case a brand. Although ‘Toyota Friends’ is currently only available in Japan, there are plans to roll out the initiative globally in the future.

Car dealerships have long been the standard place for drivers to buy new cars and trade in their old vehicles. Of course, the price you will pay for a new car often depends on which area of the country you are in.
Richer areas are unlikely to give large discounts, although buying a car in an area like Detroit, a city affected tremendously by the credit crunch and global financial crisis, may help you save a substantial sum. Despite the rise of social media, these dealerships have remained the main place where people go to buy cars.

Whether this is due to the ineffective take up of social media by automobile manufacturers or the problems that come with trying to sell something as large and expensive as a car over the Internet is a matter of debate, but the point is this: While social media continues to be used infrequently by car manufacturers to reach consumers, the majority of discounts and savings are most likely made by physically going in to a dealership.

Does Social Media Have a Role to Play in Car Sales?

Social media is best used to connect people to each other and help them feel part of something that is bigger than themselves. For reasons discussed above, it is difficult to directly sell something like a car through social media channels.

However, this doesn’t mean that brands can’t still connect with consumers by using social media. It is these connections that will eventually turn into sales. Perhaps in the future, the technology for allowing drivers to experience the cars online will mean more vehicles sold through the Internet, but for now social media is used as a tool rather than a sales platform.

Shop Around: The advice for consumers is simple — use both social media AND the traditional dealership. You may just be lucky and stumble across a deal that could get you substantial savings.